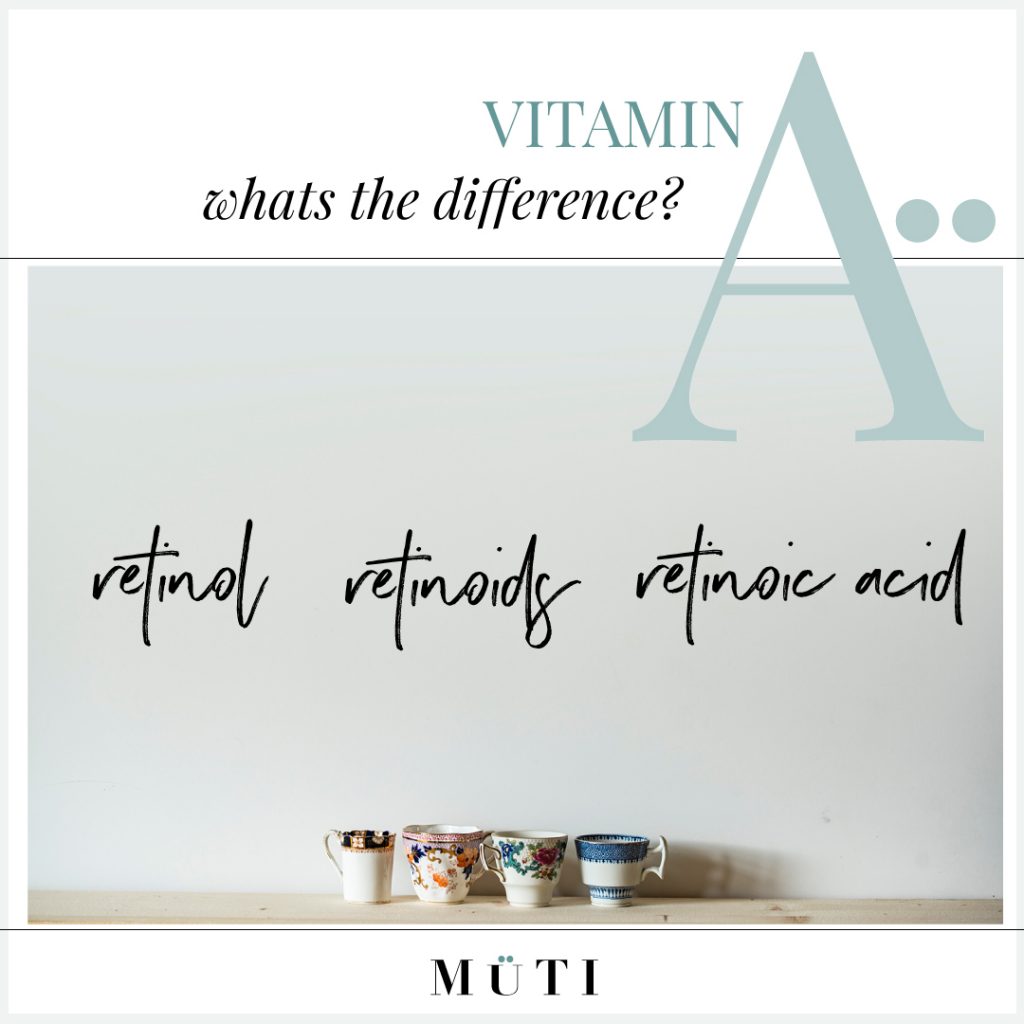 Often I am faced with clients who need to start from scratch with their skincare.
It may be that they have been fans of “soap and water and cold cream” which they were able to get away with in their twenties and thirties, but is in their forties, fifties, sixties, not so much. Or it may be that they have shelves of half-used potions and need to give it a rethink. (Let’s face it, many of us buy products based on extravagant promises and end up with multiple bottles of goop and a dim memory of what we hoped they would achieve).

So, when looking at your skincare, my first go to consideration is always Vitamin A.

Vitamin A is one of the most potent and exciting ingredients in skincare today. Used topically as retinoids, vitamin A derivatives range from prescription only retinoic acid (tretinoin), to non-prescription retinaldehyde and non-medical grade retinol.

Vitamin A used on the skin can legally claim to reverse, prevent and repair the signs of aging. It can reprogramme cellular function so not only does the appearance of ageing improve – but the skin is actually healthier.

THIS WONDER INGREDIENT CAN:

– treat acne by decreasing sebum production
– help to reduce the symptoms of rosacea (by normalising surface blood flow)
– unclog pores and reduce pore size
– increase the rate of wound healing
– exfoliate, making skin smooth and even-toned
– repair the cellular structure of the epidermis, making it stronger and more resistant
– reduce pigmentation by decreasing the clustering of melanin granules
– improve hydration both in and around the cell by promoting a healthy cell membrane

The first retinoid (tretinoin) was originally FDA approved in 1962 and developed as a powerful prescription acne treatment in the late 1960s. It appeared to work by reducing the ability of the epithelial cells in the hair follicles to stick together, and make the cells divide faster – increasing cell turnover in the outer layers of skin. For patients with acne, this decreased the build-up of keratin which formed blackheads, and improved the health of the skin.

Vitamin A has a wider range of uses because it targets several skin health issues. Dermatologists soon noticed that patients using tretinoin experienced not just clearer but softer, brighter, skin with less superficial lines. Today there are three prescription-strength retinoids: tretinoin (brands include Atralin, Avita, Retin-A, Retin-A Micro, Renova), tazarotene (Avage, Tazorac, fabior), and adapalene (Differin, which is the gentlest form, and has recently been approved for over-the counter sales in the US).

WHAT DOES VITAMIN A DO?

A wonder ingredient – however, there were some side effects which reduced its popularity -including sun sensitivity, irritation, redness and a drying of the skin. Recent variations and formulations have resulted in some formulations which are powerful, but with fewer side-effects.

There is much confusion over the range of retinoids available, and the meaning of the strength and percentages on labelling of the products. Basically

The generic term for the family of ingredients related to Vitamin A which occur naturally in our bodies. When referring to topically applied Retinoids, the only retinoid that your skin is able to process immediately is retinoic acid. All other forms of retinoids have to be converted by skin enzymes into retinoic acid before the skin is able to use it.
The only form of retinoid which cell receptors can recognise is retinoic acid – the other forms need conversion. So, over the counter retinoid is also effective at renewing skin pigmentation and texture, it takes longer. This is because retinol is gradually converted into retinoic acid (the active ingredient in the prescription creams) so it is less potent.

Medical grade, this is available on prescription only, and you need to develop a tolerance (it can burn, itch, scale, peel). Retinoic acid is powerful at the level of 0.05% (brands include Retin-A). Retinoic acid can be used by your skin without having to be broken down by your skin’s enzymes. This makes it about 100 times more potent than the average over-the counter creams containing Retinol. It is used mainly as a prescription drug for severe acne, although some dermatologists prescribe it for patients in a hurry to renew ageing skin and who are willing to tolerate the side-effects.

Also powerful and effective is Retinaldehyde – it has the advantage of having no burn, and also being available without prescription. Win-win. The disadvantage is that it is expensive when added to face creams.

Non- medical grade Retinol – typically sold as 1% or 2%
(Don’t confuse this with the 0.05% retinoic acid in tretinoin; in reality you would need a 20% concentration of retinol to equal tretinoin prescription strength retinoic acid 0,05%.)
Retinol is a specific form of vitamin A that is naturally produced in your body. It is used in over the counter products, often ‘encapsulated’ where the particles are stabilised in the bottle, but are released once placed on the skin.
When applied to your skin, enzymes in your skin convert retinol into retinaldehyde and then into retinoic acid. This two-part conversion that it has to undergo before the skin can use it makes retinol a naturally gentler substance than both retinaldehyde and retinoic acid. While results are slower, it has fewer side effects like burning or flaking and is more easily tolerated. The conversion into retinoic acid can take at least a few weeks, which is why you should use retinol products consistently for a few months before expecting to see results.
Count on 12 weeks before seeing results. But results there will be.

Retinoids are highly effective in preventing and reversing signs of ageing (pigmentation, fine lines, wrinkles), as well as moderate acne breakouts. The active ingredient used by the skin, retinoic acid, is introduced to skin care products in different strengths, from pure prescription strength, to 100 times milder retinol. What works for you is determined by your skin type, condition and what treatment or conditioning needs to be achieved.

MY GO-TO VITAMIN A PRODUCTS:

Vitamin A is found in Pure Repair Night by Akademikliniken, in a concentrated encapsulated form. There is frequently  a period of skin sensitivity, redness, when you start using this, and so it is advised that you should start with treatment every alternative day and build it up gradually.

Deciem, (the Canadian Abnormal Beauty Company) has exploded the boundaries on skincare in the last several months by producing single ingredient products of extraordinay effectiveness and concentration. But with single-digit price tags. The Ordinary Granactive Retinoid 2% in Squaline combines high concentration of an advanced retinoid complex which has been shown to have multiple better effects against the signs of agein than other non-prescription retinoids, whle at the same time offering less irritation and downsides.

Photo by Joanna Kosinska on Unsplash